How the museum started

In the early 1970’s while Pastor Richard Diamond and his wife, Alwilda, attended a crusade in Atlanta, Georgia they toured a historical wax museum. After viewing scenes of past presidents, generals, and war heroes to their surprise the last scene was the Ascension of Jesus Christ. As they both stood looking they were both brought to tears and brought to their knees. As they were feeling God’s great holy presence, Rev. Diamond knew what one day he was to accomplish for the Lord. For God spoke to his heart and gave him the inspiration to one day build a museum that would glorify the great works of God, and of the love and mercy of His son, Jesus. 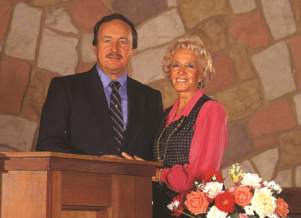 At this time Rev. Diamond was pastor of a small church called Faith Revivals, which was known throughout the city as “The Hippie Church”.

More than 10 years would pass serving God, witnessing some of the greatest healing miracles the city had ever seen and rejoicing in the restoration of many broken lives. The church had grown so much that a new church was needed.  In May 1980, the ministry moved to its´ current location at Tingley Avenue but it wasn’t until January of 1983 that the inspiration began to unfold into reality.

The search for figures began.  It soon became apparent that to purchase new wax or fiberglass figures would be too costly, so the search continued…only now focusing on used figures.

A member of the congregation, while calling various museums and manufacturers, heard of an outdoor Bible walk in Pennsylvania.  After many and varied attempts he could never seem to locate an address or a phone number. Totally frustrated, he knew that only one thing could possibly help this seemingly impossible situation…prayer.  After prayer he called information in Pittsburgh, the operator who assisted him wasn’t able to give him what he wanted but was able to give him what he needed.  It just so happened that the operator drove by this bible walk every day on his way to work. The operator told him that the bible walk had been closed, but gave him the number of a township official. If that wasn’t enough answer to prayer, the township official lived next door to the bible walk owner !!

The owner, Bill Warren, was contacted, and soon Pastor Diamond and his wife were on their way to meet Bill and look at the figures.  There were 22 figures that had been outdoors on a mountainside and were quite weathered. Nonetheless, a price was agreed upon and the first figures were on their way. Soon after that Bill and his wife Gail, came to Mansfield to visit the church and attend a service.  They were so inspired by the work being done and the love they felt, they donated the figures instead of selling them.

By the end of 1983, three scenes were on display at Diamond Hill Cathedral, The Last Supper, Jesus and the Children, and The Woman at the Well.  Receiving God’s guidance in this project was very important to Pastor Diamond.  For the year of 1984, the congregation joined the Pastor and his wife fasting a day a week that God would lead and direct the ministry.  God knows when you are serious about something, and indeed, the hand of God was evident at every turn, not only that year but for years to follow. 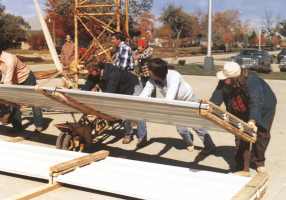 After much research and looking at various cities, it was decided that the museum would be built right on the church property. The site chosen was then a garden. A metal building was ordered early in the year to be delivered in September.  This was truly a church project as the members joined together to prepare the site and raise the building. Once the building was under roof, members worked on drywall, framing the scenes, touching up and reconstructing the figures, making costumes and detail items.  Many who were laid off from work counted it a blessing so they could work on the museum. When the work was completed, nearly everyone was called back to work, often at a higher rate of pay.  Except for a cement contractor, the entire project was completed by church members and donated labor.   By Christmas of 1986, the building and 6 scenes were completed for the first preview. Three more scenes were completed in time for the Easter 1987 preview.  Excitement and anticipation mounted as completion was in sight. People could be found working all hours of the day and night.  Grand opening was scheduled for August but there was still much work to be done.  Scripts for scenes needed to be written and recorded, wiring and electrical work, special effects and lighting, volunteer tour guides needed trained, but everything fell into place.

Pastor and Mrs. Diamond joined the tour guides and workers in thanksgiving and prayer and on August 15, 1987 at 10:00 am, the Living Bible Museum was officially open. Very appropriately, Bill Warren and his family were the first visitors to tour the museum. Since then thousands have enjoyed the “walk of faith” and the work still goes on. Many changes have taken place over the years and there will be more should the Lord tarry.  Our sincerest prayer is that the Word of God and the Holy Spirit would touch your life in a very special way as you walk through the Bible, inspiring you to a new awareness of the love, mercy, and eternal hope through the promise of our Lord, Jesus Christ. 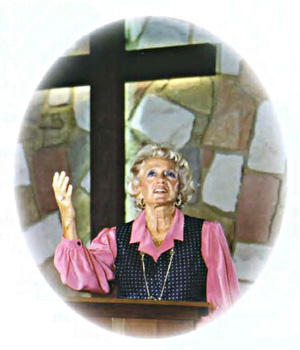 In loving memory of Alwilda Diamond

Our beloved Mrs. Diamond, our Pastor’s wife and Mother of our church, a special friend to everyone who met her, has passed away and is now home with Jesus. She has inherited her reward. I can only imagine her joy!

But I also remember the great joy she shared with others while she was with us. The joy she shared, not only with our church members, but with all the visitors who came to walk the hallways of BibleWalk.

I remember the times she would come to BibleWalk to greet the groups. Oh how happy she would be when people were coming out of the chapel, because she knew their tour was concluded and they had just walked through “God’s Holy Word”.

She would ask them many questions about their time and experience at BibleWalk. But the most important question she always asked was simply this, “Do you know Jesus?” She lived to ask that question and then do whatever needed to be done so she could hear the answer… Yes.

Her smile, laugh and encouragement is so greatly missed by all who knew her. I believe her joy and love are still here walking the hallways with us. So, when you come to BibleWalk and you begin your tour, remember there was a very special lady that has gone before you and has already prayed for you; and at the conclusion of your tour, perhaps you may want to ask yourself the same question, “Do you know Jesus?” because this is what Alwilda would have asked you.